Questions remain regarding Wikipedia’s alleged bias towards Israel over the Palestinian people. It must be noted that the overwhelming majority of its editors — and the English edition has almost 130,000 of them — reside in North America and Europe, which is understandably more likely to exhibit a Western bias on all issues and most especially the Palestinian one. For ten consecutive days in the month of August, and in the wake of the shambolic UAE-Israel “peace deal,” Israeli warplanes bombed the Gaza Strip, leaving an already traumatized, defenseless, and encaged civilian population further terrorized and deserted.

“Despite being aware of the overwhelming moral support by the international community, we feel absolutely lonely. It feels like we are shouting at the top of our lungs, protesting against the illegal occupation from a deep and dark well with very high walls surrounding us,” Muhammad Smiry, a 28-year-old resident of Gaza, told me on the seventh night of the Israeli military bombings.

Further adding to their sense of abandonment and betrayal was the absence of reporting in the Western news media. When Israeli bombs fall upon Gaza, the screams and cries of Palestinian women and children do not carry as far as the newsrooms in New York, London, and Berlin, evidently.

This leaves the Internet, or rather Google, as the only means in which an American, European, or Brit gains information on Israel’s latest terrorist campaign in the Palestinian enclave, which is often and accurately described as an open-prison or concentration camp.

When you google the words “Gaza bombings” the first two search results do not relate to Israel’s most recent bombing campaign.

When you google the words “Gaza bombings,” however, the first two search results do not relate to Israel’s most recent bombing campaign but include a pair of Wikipedia entries titled “Gaza-Israel Conflict” and “2014 Israel-Gaza Conflict,” respectively.

It’s worth bearing in mind that studies of Internet search behavior show that 67 percent of people do not go beyond the first five listings on a search engine, with the top two results gaining the lion share of clicks.

In this instance, the problems start when you click on either of the two Wikipedia links, with the former falsely rooting the “conflict” in the “election of the Islamic political party Hamas in 2005 and 2006,” and the latter parroting Israel’s version of events leading up to the killing of more than 2,000 Palestinians over 53 bloody days in 2014.

All of which leads to a very obvious question: Does Wikipedia have a pro-Israel bias? 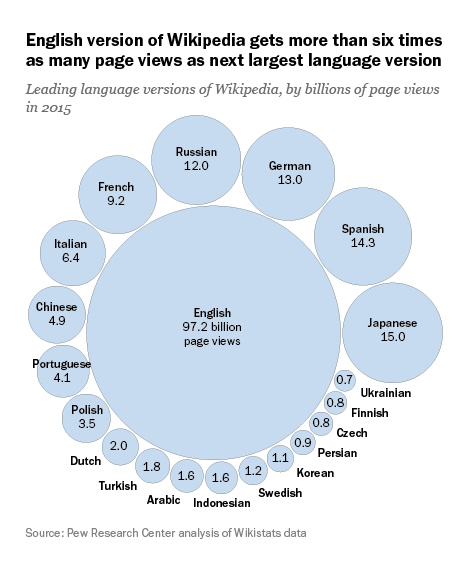 Wikipedia was founded in 2001 by Jimmy Wales and Larry Sanger. It boasts 40 million users (that is people who have registered accounts with a username), features more than 54 million articles, and includes more than 1,100 administrators. The English Wikipedia, the largest language edition, as of September 2020 had 128,456 editors.

Wikipedia is translated into 285 languages and has become the first port of call for hundreds of millions of daily Internet searchers seeking a rudimentary level or cliff notes understanding on any particular country, civilization, or topic. In fact, in March 2020, Wikipedia reported that overall, it attracted some 1.5 billion unique visitors per month. It’s the 12th most visited website in the world, according to Alexa Internet.

The site’s content is gathered and curated by its army of editors and contributors, all of whom are verified volunteers, and 90 percent of whom are men.

“Wikipedia is built on the personal interests and idiosyncrasies of its contributors,” observes the technology centric magazine Wired. In 2007, Steve Carell’s character in the hit television series “The Office” called the website “the best thing ever because anyone in the world can write anything they want about any subject – so you know you are getting the best possible information.”

A flawlessly written joke in the age of online disinformation if there ever was one!

So, if the content on Wikipedia reflects the personal biases and preferences of its volunteer administrators, then one must ask who are its administrators?

According to Wikipedia, the overwhelming majority of the site’s 1,138 administrators reside in the United States (20 percent), followed by Germany (12 percent) and Russia (7 percent). In fact, the only non-European or North American country among the top ten is India (3 percent).

It’s therefore only reasonable to assume that a majority, or even large majority of contributors hold a view towards the Israeli-Palestinian conflict that falls squarely or somewhere in line with the official foreign policy position of their country. Now given pretty much every Western democratic country boasts of maintaining a “special relationship” with Israel, the problem becomes obvious.

Jimmy Wales, the founder of Wikipedia, described himself as a “strong supporter of Israel” in a 2015 interview with the Jewish Telegraphic Agency (JTA).

An even more obvious problem is Jimmy Wales, the founder of Wikipedia, who described himself as a “strong supporter of Israel” in a 2015 interview with the Jewish Telegraphic Agency (JTA), adding, “So I don’t listen to critics.”

Although he has promised to keep the website “neutral.”

In a 2011 email exchange, however, Lebanese journalist and activist Joey Ayoub accused Wales of sanctifying “Israel’s continuous violation of international law and human rights abuse” and defying the BDS movement by participating in the Israeli Presidential Conference held in Haifa in 2011.

Wales responded to Ayoub’s accurate description of Israel as a “blood soaked” apartheid state by parroting what has become the first line in the Israeli hasbara handbook, asking, “How about those [Hamas] rockets? Complaining about any of those?”

When I asked Ayoub to reflect on his brief online encounter, and whether he thought either Wikipedia or Wales had since improved its handling and understanding of the Israeli-Palestinian conflict, he replied:

“I think that even then [Wales] wasn’t interfering with editorial policies and that Wiki writers are generally free to write what they want, but whether that translates into accurate or fair coverage – I don’t know. I know that it depends on how many volunteers there are to write and therefore their own biases, if they’re not as careful with the facts.”

While it’s certainly likely Wales hasn’t interfered or stamped his bias for Israel onto the website’s pages, one must wonder how much content belonging to Yesha Council – a right-wing Israeli organization – remains on the site after it flooded pages with a “Zionist slant” in 2010.

One must wonder how much content belonging to Yesha Council – a right-wing Israeli organization – remains on the site after it flooded pages with a “Zionist slant” in 2010.

If Wales is truly committed to Wikipedia reflecting “neutrality” on the Israel-Palestinian conflict, as he proclaims, then he should allow human rights groups to conduct an audit of pages related to the conflict and provide them with an opportunity to present their findings.

Misinformation, disinformation, and biased narratives have helped make the Israeli-Palestinian conflict one of the world’s most protracted. There won’t be peace in the Middle East until objectivity and fairness are allowed to reign supreme.

Author’s note: Inside Arabia has reached out to Wikipedia for comment but is yet to receive a response.